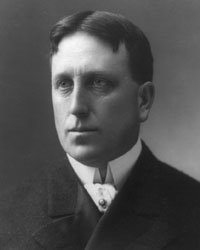 Born April 29, 1863 in San Francisco, California,William Randolph Hearst was the only child of George Hearst, a self-made multimillionaire miner and rancher, and Phoebe Apperson Hearst. George Hearst's grandfather John Hearst emigrated to America, from the north of Ireland, in 1766

In 1887 aged 23, having studied at Harvard he became "Proprietor" of the San Francisco Examiner which his father, George Hearst, accepted as payment for a gambling debt. In 1985 he acquired the New York Morning Journal, and launched the Evening Journal in 1896. He sensationalized journalism by the introduction of banner headlines and lavish illustrations.  Inspired by the journalism of Joseph Pulitzer, Hearst turned the newspaper into a combination of reformist investigative reporting and lurid sensationalism. He soon developed a reputation for employing the best journalists available including Mark Twain, Richard Harding Davis and Jack London.

Hearst was a member of the United States House of Representatives (1903-07) At his peak he owned 28 major newspapers and 18 magazines, along with several radio stations and movie companies. The Great Depression weakened his financial position and by 1940 he had lost personal control of his vast communications empire. Hearst upset the left-wing in America by being a pro-Nazi in the 1930s and a staunch anti-Communist in the 1940s. Believed by many to have initiated the Spanish--American War of 1898 to encourage sales of his newspaper, he also advocated political assassination in an editorial just months before the assassination of President McKinley.

His national chain of newspapers and periodicals grew to include the Chicago Examiner, Boston American, Cosmopolitan and Harper's Bazaar. His life inspired the Orson Welles film Citizen Kane was an American newspaper magnate and leading newspaper publisher.