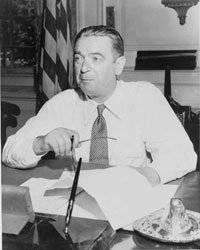 Born in Co. Mayo Ireland on July 11, 1890, William O' Dwyer immigrated to New York City in 1910.He found work as a plaster's helper, longshoreman and as a policeman. While with the New York City Police Department he attended law school at night at Fordham University and graduated in 1923, giving up his policeman's job the next year.

He built up a successful law practice before serving as a Kings County (Brooklyn) Court judge when he was appointed a magistrate in Brooklyn, New York, he served in that office for six years before then being appointed a county judge. In 1939, when he was elected District Attorney in Kings County (Brooklyn) New York he won a reputation for his vigorous prosecution of what came to be called "Murder Incorporated."

He first ran for Mayor of New York City in 1941 against La Guardia, however after losing the mayoral election to Fiorello La Guardia in 1941, O'Dwyer enlisted in the Army, achieving the rank of brigadier general. In 1945, O'Dwyer received the nomination of the Tammany Hall Democrats and easily won the mayoral election. At his inauguration, O'Dwyer celebrated to the song, "It's a Great Day for the Irish. He held that office for the next five years, at first building a reputation as an opponent of the corrupt influences of Tammany Hall.
President Truman following his resignation as mayor, named him Ambassador to Mexico in 1952, a position he held until the election of Dwight D. Eisenhower as President of the United States.

He died in a New York City hospital on November 24, 1964 at the age of 74 and was buried in Section 2 of Arlington National Cemetery.