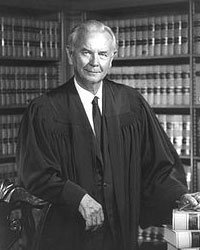 Brennan was born April 25, 1906, in Newark, New Jersey. He was the second of eight children of William Joseph Brennan and Agnes McDermott Brennan, Irish immigrants originally from Co. Roscommon, who settled in Newark in the 1890s. His father worked as a coal shoveler in a brewery and, according to Brennan, was the most influential person in his ife. He was also a labor leader and municipal reformer who imbued Brennan with a profound social conscience and an affinity for activism.

He began his legal career in 1932 with the Newark law firm of Pitney, Hardin, and Skinner. The firm later added Brennan as a partner and became Pitney, Hardin, Ward, and Brennan. During WW II, Brennan served in the U.S. Army and eventually became the labor branch chief, Civilian Personnel Division of Army Ordnance. He rose to the rank of colonel and was awarded the Legion of Merit for services to the Army and Army Air Forces procurement programs.

After his army service, Brennan returned to private practice, counseling large manufacturing corporations on labor matters. In 1949, he was tapped by New Jersey's Republican governor to serve on the state's superior court. Assigned to the appellate division, he distinguished himself by implementing reforms that relieved congestion in the court calendar. He was appointed to the New Jersey Supreme Court, and took his seat on March 24, 1952.

Brennan had served only four years on the New Jersey Supreme Court when, to the surprise of everyone, including Brennan, President Eisenhower nominated him to serve on the U.S. Supreme Court. Eisenhower, a Republican, would later regard his appointment of the liberal Democrat as one of his worst mistakes, Brennan along with Earl Warren led the Court into an unprecedented era of judicial activism that was anathema to conservatives like Eisenhower.

The first Roman Catholic appointed to the Supreme Court; he served as associate justice of the Court from 1956 to 1990. His unshakable belief in the Constitution as the guardian of individual rights and liberties garnered both respect and criticism.