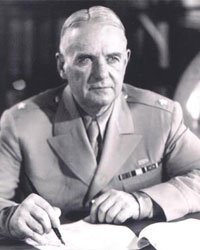 Born in 1883 in Buffalo, New York, William Donovan was a U.S. intelligence official. “Wild Bill, ” as he was known, was the World War II director of the American intelligence effort.

Of Irish descent, Donovan was born to first generation immigrants Anna Letitia "Tish" Donovan née Lennon and Timothy P. Donovan, of Ulster and County Cork origins respectively. His grandfather Timothy O'Donovan (Sr.) was from the town of Skibbereen, being raised there by an uncle, a parish priest, and married Donovan's grandmother Mary Mahoney, who belonged to a propertied family of substantial means which disapproved of him. They would move first to Canada and then to New York, where their son Timothy (Jr.), Donovan's father, would attempt to engage in a political career, but with little success. This waited for his son in other arenas.

William Joseph attended St. Joseph's Collegiate Institute and Niagara University before starring on the football team at Columbia University. On the field, he got the nickname that would stick with him for the rest of his life, Wild Bill Donovan. Donovan graduated from Columbia in 1905 and was a member of the Phi Kappa Psi fraternity.

Donovan was a powerful Wall Street lawyer and a Columbia Law School classmate of Franklin D. Roosevelt. In 1912, Donovan formed and led a troop of cavalry of the New York State Militia, that in 1916 served on the U.S.-Mexico border in the Pancho Villa campaign.

Donovan was an active member of the Republican Party and after meeting Herbert Hoover he worked as his political adviser, speech writer and campaign manager.

During the First World War Donovan joined the United States Army and as a colonel in the 69th Infantry Regiment won the Medal of Honor and three Purple Hearts. While in Europe he visited Russia and spent time with Alexander Kolchak and the White Army.

Donovan ran unsuccessfully as lieutenant governor in 1922 but was appointed by President Calvin Coolidge as his assistant attorney general. In 1932 he was the Republican candidate for the post of governor of New York.

By the time Franklin D. Roosevelt was elected president in 1932 Donovan was a strong opponent of Roosevelt's New Deal but shared the president's concern about political developments in Nazi Germany and in 1940 Donovan agreed to take part in several secret fact-finding missions in Europe.

In July 1941, Roosevelt appointed Donovan as his Coordinator of Information. The following year Donovan became head of the Office of Strategic Services (OSS), an organization that was given the responsible for espionage and for helping the resistance movement in Europe. He was helped in this by William Stephenson and Britain's MI6 chief, Stewart Menzies.

Donovan was given the rank of major general and during the Second World War he built up a team of 16,000 agents working behind enemy lines. The growth of the OSS brought conflict with John Edgar Hoover who saw it as a rival to the Federal Bureau of Investigation.

As soon as the Second World War ended President Harry S. Truman ordered the OSS to be closed down. However, it provided a model for the Central Intelligence Agency (CIA) established in September 1947.

Donovan returned to his law practice in 1946 but agreed to become ambassador to Thailand in 1953. William Donovan died in 1959

He hoped to make the Office of Strategic Services a permanent agency, but President Harry S. Truman abolished the agency in October 1945. His plan for the OSS was eventually adapted as the blueprint for the Central Intelligence Agency, garnishing him the title "Father of American Intelligence".