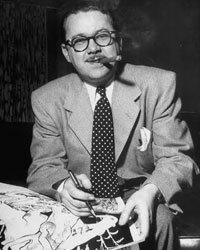 He migrated to California at the age of 22, to work on Donald Duck cartoons at Walt Disney Studios in 1935. He stayed until the strike in 1941, long enough to animate on Pinocchio, Fantasia, Dumbo and The Reluctant Dragon. After leaving Disney, Kelly worked for Dell Comics, a division of Western Publishing of Racine, Wisconsin.

He won the National Cartoonists Society's Reuben Award in 1951 for Cartoonist of the Year, and their Silver T-Square Award in 1972, which is given to persons having "demonstrated outstanding dedication or service to the Society or the profession."

The characters of Pogo the possum and Albert the alligator were created by Kelly in 1941 for issue #1 of Dell's Animal Comics, in a story titled "Albert Takes the Cake."Both were introduced as comic foils for a young black boy character named Bumbazine (a corruption of bombazine, a fabric that was usually dyed black and used largely for mourning wear), who also lived in the swamp. Bumbazine was retired at an early date, however, because Kelly found it hard to write for the human child. He eventually phased humans out of the comic books entirely, preferring to use the animal characters to their full comic potential. Kelly said he used animals—"nature's screechers," as he called them—"largely because you can do more with animals. They don't hurt as easily, and it's possible to make them more believable in an exaggerated pose." Pogo quickly took center stage, assuming the straight man role that Bumbazine had occupied.


In 1948, Kelly was hired to draw political cartoons for the editorial page of the short-lived New York Star newspaper, and decided to do a daily comic strip featuring the characters he had created for Animal Comics. The first comic book series to make the permanent transition to newspapers, Pogo debuted on October 4, 1948 and ran continuously until the paper folded in 1949. On May 16, 1949, the strip was picked up for national distribution by the Post-Hall Syndicate. George Ward and Henry Shikuma were among Kelly's assistants on the strip. It ran continuously until (and past) Kelly's death from complications of diabetes on October 18, 1973.