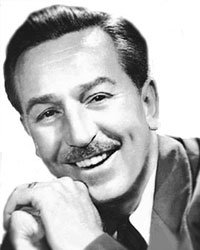 Walter Elias "Walt" Disney , born December 5, 1901 was an American film producer, director, screenwriter, voice actor, animator, entrepreneur, entertainer, international icon, and philanthropist. Disney is famous for his influence in the field of entertainment during the 20th century. As the co-founder with his brother Roy O. Disneyof Walt Disney Productions, Disney became one of the best-known motion picture producers in the world. The corporation he co-founded, now known as The Walt Disney Company, today has annual revenues of approximately U.S. $35 billion.

Disney is particularly noted for being a film producer and a popular showman, as well as an innovator in animation and theme park design. He and his staff created a number of the world's most famous fictional characters including Mickey Mouse, a character for which Disney himself was the original voice. He has won 26 Academy Awards out of 59 nominations, including a record four in one year, giving him more awards and nominations than any other individual.

He also won seven Emmy Awards. He is the namesake for Disneyland and Walt Disney World Resort theme parks in the United States, as well as the international resorts in Japan, France, and China.

The Disney family took part in a failed rebellion against the King of England in the late 1600s. Forced out of England his ancestors ended up in Ireland, around Gowran in County Kilkenny. His great-grandfather Arundel Elias Disney was born in Kilkenny in 1801 and emigrated to the States in 1834, travelling with his brother Robert and their families from Liverpool to New York. Three of Walt Disney’s other Irish ancestors are buried in Clonmelsh graveyard, Ballyloo, County Carlow. Walt’s nephew, Roy E. Disney, the last member of the family to be involved in the Disney company, he came to Carlow several times to check out his Irish ancestors. He also owned a castle in Cork, and was a regular visitor to Cork race week.