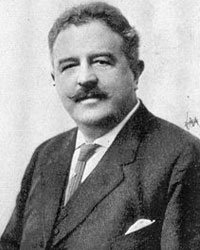 Born February 1, 1859 in Dublin his parents were Edward Herbert and Fanny Lover. Herbert was a grandson of the Irish novelist, playwright and composer Samuel Lover. Following his fathers death his mother remarried Dr. Carl Schmidt a German doctor and the family moved to Stuttgart, Germany. The young boy received his primary education in the German Gymnasium and happily looked forward to becoming a doctor. By the time Victor was a teenager, family financial conditions forced him to abandon the idea of any expensive medical education and Victor turned to music.

Studying both the piano, flute and piccolo, Herbert became a renowned cellist and by the age of 19 had played with every major orchestra throughout Germany, performing with Baron Paul von Derwies’ private orchestra in Lugano and one year with the Eduard Strauss Orchestra in Vienna. Eventually, Herbert won a position in the Royal Court Orchestra of Stuttgart flourishing as a soloist.

In 1883, Herbert served as both soloist and composer of his own earliest known work, "Suite for Cello and Orchestra, Op.3." The work established his reputation as a reputable composer. In 1885, he met the young soprano Therese Forster who had secured a position at the Stuttgart orchestra as a prima donna. Forster had caught the eye of Frank and Walter Damrosch of the 4-year-old Metropolitan Opera Company in New York City and when the Damrosch’s offered a contract to Forster, she accepted on the condition that Herbert would also be given a job in the orchestra. In August 14, 1886, the couple married and set sail for their new, and permanent home in America.

From 1887-1904, Herbert worked as a cellist in the New York orchestra’s of Theordore Thomas and Anton Seidl, and upon Patrick S. Gilmore’s 1892 death, Herbert took over direction of his 22nd Regiment Band, which he helmed until accepting the position of principal conductor with the Pittsburgh Symphony Orchestra in 1898. By 1904, Herbert was leading his own Victor Herbert Orchestra. During his career as a cellist, Herbert was composing music that undoubtedly was a mixture of European romanticism and American tradition. He is arguably the greatest influence on American theater, transitioning it from vaudeville and variety acts to operatic and story-based entertainment.

Herbert was extremely prolific writing scores for productions and the first original background film score for The Fall of a Nation.

As one of the co-founders of the American Society of Composers, Authors, and Publishers (ASCAP), serving as director and vice president for a decade. Herbert was working on a number for the Ziegfeld Follies of 1924, when he collapsed, and died of coronary arrest, while visiting his doctor.

It is difficult to comprehend the American popular song without the music and vision of Victor Herbert. Today, Herbert is revered as one of the giants of the American Musical Theater. In 1917, his suit against Shanley’s Restaurant resulted in the US Supreme Court’s decision to uphold the right of a copyright owner to receive royalties from public performances. This decision was a definitive moment in American culture as a whole and one that affects all aspects of creative and intellectual property.