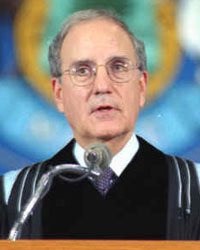 George John Mitchell, Jr., born August 20, 1933 is the U.S. Special Envoy for Middle East Peace during the Obama administration. A Democrat, Mitchell was a United States Senator who served as the Senate Majority Leader from 1989 to 1995. For Irish people he has a name that is synonymous with the Northern Irish peace process, having chaired the talks that led to the Good Friday Agreement. A partner in the New York City law firm DLA Piper, Mitchell served as a U.S. senator from Maine for fifteen years. He is a second-generation Irish-American.

Born in Waterville, Maine, his mother had come to the United States from Lebanon at age 18, his father was the orphaned son of Irish immigrants. Both parents lacked education, and struggled to support their family, but they emphasized the importance of education for all their children. George Mitchell received an undergraduate degree from Bowdoin College in 1954 and served in Berlin, Germany as an officer in the U.S. Army Counter-Intelligence Corps until 1956. He received his law degree from Georgetown University Law Center in 1960.

From 1960 to 1962 George Mitchell served as a trial lawyer in the Justice Department in Washington, D.C. From 1962 to 1965 he was Executive Assistant to Senator Edmund S. Muskie of Maine. In 1965 George Mitchell returned to Maine to practice law until 1977. He served as Deputy Campaign Manager for Senator Muskie's vice presidential campaign in 1968, and for his presidential campaign in 1972. In 1977 Mitchell was appointed U.S. Attorney for Maine, a position he held until 1979, when he became U.S. District Judge for Maine.

George Mitchell was appointed to the United States Senate in 1980, to complete the unexpired term of Senator Edmund S. Muskie, who had resigned to become Secretary of State. Mitchell was elected to a full term in the Senate in 1982. In 1986 he chaired the Democratic Senate Campaign Committee, and was instrumental in his party's regaining the majority in the Senate. Mitchell himself was reelected in 1988 with 81 percent of the vote, the largest margin in the history of the state of Maine. At the opening of the next session, he was elected Senate Majority Leader, the second most powerful elected official in the United States, a position he held for the next six years.

Senator Mitchell was also a leader in opening markets to trade and led the Senate to ratification of the North American Free Trade Agreement and creation of the World Trade Organization.

For six consecutive years he was voted "the most respected member" of the Senate by a bipartisan group of senior congressional aides. In 1994 George Mitchell declined an appointment to the Supreme Court of the United States in order to remain in the Senate and pursue the struggle for universal national health care.

After finishing his last Senate term in 1995, George Mitchell answered the request of the British and Irish Governments to serve as Chairman of the International Commission on Disarmament in Northern Ireland, and as Chairman of the subsequent peace negotiations, culminating in the historic Good Friday agreement. In an island-wide referendum, the agreement was approved by voters on both sides of the border between the Republic of Ireland and the British-controlled North. After this success in Ireland, President Clinton, Prime Minister Barak of Israel and Chairman Arafat of the Palestinian Authority asked Senator Mitchell to chair an International Fact Finding Committee on the crisis between the Israel and the Palestinian Authority.

Senator Mitchell serves as the Chancellor of The Queen's University of Belfast and as President of The Economic Club of Washington. Within days of taking office, President Obama called on George Mitchell to serve as his Special Envoy to the Middle East. Once again, the world looks to George Mitchell to bring lasting peace to a region tormented by seemingly hopeless violence years."