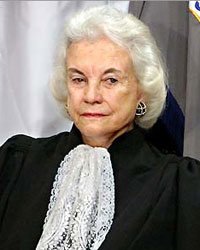 Jurist and U.S. Supreme Court justice. Born on March 26, 1930, in El Paso, Texas. Sandra Day O’Connor became the first woman to serve as a justice on the United States Supreme Court in 1981. Shespent part of her childhood on her family’s Arizona ranch.

After graduating from Stanford University in 1950 with a bachelor’s degree in economics, Sandra Day O’Connor attended the university’s law school. She received her degree in 1952 and worked in California and Frankfurt, Germany, before settling in Arizona.

In Arizona, Sandra Day O’Connor worked as the assistant attorney general in the 1960s. In 1969, she made the move to state politics with an appointment by Governor Jack Williams to state senate to fill a vacancy. A conservative Republican, O’Connor won re-election twice. In 1974, she took on a different challenge. O’Connor ran for the position of judge in the Maricopa County Superior Court.

As a judge, Sandra Day O’Connor developed a solid reputation for being firm, but just. Outside of the courtroom, she remained involved in Republican politics. In 1979, O’Connor was selected to serve on the state’s court of appeals. Only two years later, President Ronald Reagan nominated her for associate justice of the U.S. Supreme Court. O’Connor received unanimous approval from the U.S. Senate. She broke new ground for women in the legal field when she was sworn in as the first female justice on the Supreme Court.

As a member of the court, Sandra Day O’Connor was considered to be a moderate conservative. She tended to vote in line with her politically conservative nature, but she still considered her cases very carefully.

Justice O'Connor's first major case came in 1982. In this case about sex discrimination she wrote the opinion that a male student could not be rejected from a nursing school because of his gender. She received the most attention, however, for a case in 1989, Webster vs. Reproductive Health Services that restricted access to abortions in certain cases. Justice O'Connor was the deciding vote. The 5 to 4 decision upheld the law giving states the right to make specific abortion decisions. Conservatives had hoped that her swing vote in this case would lead to further restrictions on abortions and a repeal of the famous Roe Vs. Wade. Justice O'Connor would not go that far, however, and Roe vs. Wade has not been overturned.

During her legal career, Justice O'Connor was regarded as a consummate compromiser; her goal on issues was simply to achieve a majority vote. She is considered to be tough and is a conservative, but not as tough or conservative when it comes to women's rights and children. O'Connor made it clear that she believes a court's role, including that of the Supreme Court, is to interpret and not to legislate. She has been referred to as the most influential woman in America.

Many times she focused on the letter of law, not the clamoring of politicians, and voted for what she believed best fit the intentions of the U.S. Constitution.

Sandra Day O’Connor retired from the court on January 31, 2006. Part of her reason for retiring was to spend more time with her husband, John Jay O’Connor. The couple has been married since 1952 and has three sons.

For 24 years, Sandra Day O’Connor was a pioneering force on the Supreme Court and will always be remembered as acting as a sturdy guiding hand in the court’s decisions during those years—and serving a swing vote in many important cases.