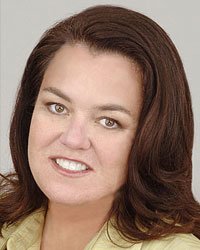 Rosie O Donnell third of five children, was born into an Irish family and raised in Commack, Long Island, New York. She is the daughter of Roseann Teresa (née Murtha), a homemaker, and Edward Joseph O'Donnell, an electrical engineer who worked in the defense industry. O'Donnell's father had immigrated from County Donegal, Ireland during his childhood, and her mother was Irish American.

O'Donnell launched her career as a stand-up comedian but eventually took on the big screen in 1995 with The Rosie O'Donnell Show, which went on to beat Oprah Winfrey in the Emmy's race for five years.

In 1993 Rosie founded the 'Rosie's For All Kids Foundation',  a charity dedicated to helping America’s kids by supporting non-profit programs that serve disadvantaged children. The Foundation aims to provide these children with opportunities to succeed, brighten their futures, and raise their spirits. O’Donnell’s dedication to helping kids born into poverty through the support and development of programs and activities that would otherwise be inaccessible to them is persistent. Since its inception the foundation has awarded over $30 million in grants to child-related organizations.