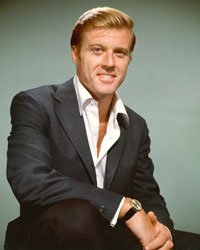 Born on August 18, 1936, in Santa Monica, California, to Charles Robert Redford, an accountant for Standard Oil, and Martha W. Hart.

The turning point in his career came when he co-starred with Paul Newman in the enormously popular comic western Butch Cassidy and the Sundance Kid (1969), in which he portrayed the outlaw Sundance Kid. The film became the top-grossing picture of the year, and Redford was soon one of Hollywood's most popular and bankable stars.

In 1980 Redford established the Sundance Institute, which provides a workshop for young filmmakers each summer and sponsors the annual Sundance Film Festival in Park City, Utah. By the 1990s the festival had become one of the leading international film festivals, and it is regarded as a vital showcase for new talent. For his work with Sundance and other contributions to film, Redford was presented with an honorary Academy Award in 2002. His numerous other awards include the Dorothy and Lillian Gish Prize (2008).

In 2007, Time magazine named Redford a “Hero of the Environment.” In 2009, Redford was awarded the Duke LEAF award for his contribution to environmental issues through fine arts.