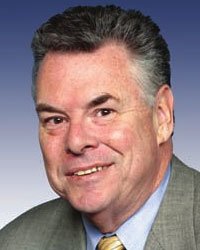 Born April 5, 1944 in Manhattan and raised in Sunnyside, Queens, New York Peter T. King can trace his family has Irish roots that trace back to County Galway and County Limerick. His father, Peter King, was a New York City police officer.

King graduated from St. Francis College in Brooklyn in 1965 and earned his Juris Doctor (J.D.) from the University of Notre Dame Law School in 1968. Upon graduating from law school, he worked for the Nassau County District Attorney’s Office until Democrat Denis Dillon was elected district attorney in 1974 (like King, Dillon would later become a staunch conservative Republican and involved in the Northern Ireland peace process).

King served in the 69th Infantry Regiment of the New York National Guard from 1968 until he was honorably discharged in 1974.

A Republican politician from the U.S. state of New York, currently the United States Congressman for the state's 3rd Congressional District, King is one of only two Republicans to represent the state of New York at the federal level. King was considered a possible candidate for United States Senate in 2010, but has decided to run again for his congressional seat, however, in January 2010, King said he was reconsidering a Senate run.