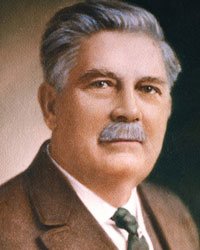 Patrick Cudahy, Jr. born March 17, 1849 was an American industrialist in the meat packing business and a patriarch of the Cudahy family. Cudahy was born on St. Patrick's Day in Callan, County Kilkenny, Ireland. Three months after he was born his family moved to Milwaukee.

Patrick was only 13 when he began working as a “carrying boy” for Edward Roddis. Packing houses closed down from March until October in those days, because there was no way to keep the meat cool. In the off months, Patrick worked in nurseries. He acquired a love for flowers and parks. When he was 17, he began an apprenticeship in the stone cutting trade; but he always returned to meat packing. Working at a new firm, he packed 250 barrels of pork each day.

In 1874, when he was 25, he became Superintendent of Plankinton and Armour. It was the largest meat packing plant in Milwaukee. His salary was $1,600 a year. Patrick advanced fast. In 1874 the packing industry turned from barreled pork to a cured meat business. The young man met the change with so much success that Plankinton gave him a one-sixteenth interest in the business. Ten years later Patrick became Plankinton’s junior partner. And four years after that, in 1888, Plankinton retired and transferred his interest to Patrick and his brother John Cudahy.

At Cudahy Brothers, John was Secretary and Legal Counsel he revolutionized the meat industry by introducing refrigerated processing and transportation.