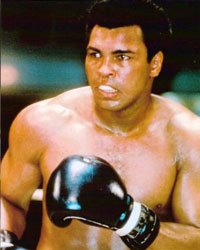 The former heavyweight boxing champ. In 1999, Ali was crowned "Sportsman of the Century" by Sports Illustrated. He won the World Heavyweight Boxing championship three times, and won the North American Boxing Federation championship as well as an Olympic gold medal.

Abe Grady, his maternal great-grandfather, of Ennis, Co. Clare emigrated from Ireland and settled in Kentucky in the 1860s, he went on to marry a former slave. One of their grandchildren, Odessa Lee Grady Clay, gave birth to Ali -- then Cassius Clay -- in 1942.

Often referring to himself as "the greatest," Ali was not afraid to sing his own praises. He was known for boasting about his skills before a fight and for his colorful descriptions and phrases. In one of his more famously quoted descriptions, Ali told reporters that he could "float like a butterfly, sting like a bee" in the boxing ring.

In 2009, the former heavyweight boxing champion visited Ennis - where he received a large "homecoming" from town residents - and met distant relatives.  Fans adorned streets with red, white and blue bunting and flags, Ali, who is 68 and battling Parkinson's disease, fought only once in Ireland, knocking out Alvin Lewis at Dublin's Croke Park on July 19, 1972. His visit to Ennis Town Hall was broadcast live on big-screen televisions outside, where locals also took in a live concert by traditional musicians, including accordionist Sharon Shannon.

Ali's wife, Yolanda, said her husband's Irish blood might help explain his legendary ability to bludgeon his opponents with blarney as well as punches. Ali was driven through the town to Turnpike Road, where his great-grandfather lived before sailing for America. He met several representatives of the Grady clan, most of them O'Gradys -- the O connoting "son of" in the native Irish tongue. Later, Ali was guest of honor at a fundraising banquet at nearby Dromoland Castle.