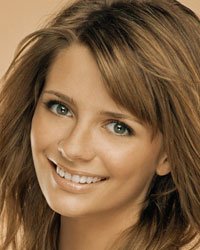 Born in Hammersmith London, Mischa Barton moved to New York when she was six years old. From humble beginnings in New York Theater in 1994, where she trained with such esteemed director/writers as James Lapine ("Twelve Dreams" at Lincoln Center with Donna Murphy), Tony Kushner ("Slavs!" at New York Theater Workshop with Marisa Tomei), and Naomi Wallace ("One Flea Spare" at the Public Theatre with Dianne Wiest), she went on to work side by side with modern-day screen icons. Her mother Nuala née Quinn is Irish to this day the actress has family in Co. Sligo.

Barton, who starred as "Marisa" on the popular Fox television show, "The O.C.",  has earned many awards including a Television Critics Association Award nomination for "Outstanding New Program of the Year" the talented actress has also made a name for herself in the fashion world, where she was awarded the VIPer Award in 2008 for "Style Icon 2007" by Mr. Karl Lagerfeld. She has already graced the covers of countless international magazines and has become the face of numerous advertising campaigns.

This commercial and theatrical success has given the young woman an opportunity to take an extremely influential role in the global community. She became the spokesperson for "Climate Star", an organization that fights global warming through social and legislative activism. She serves as an "Entertainment Industry Foundation" ambassador teaming up with QVC to spread awareness and raise funds for women's cancer research through the "Fashion Footwear Association" of New York "Shoes on Sale Initiative" and is also involved in the "SAFE" campaign for skin cancer awareness. She is an ambassador for "Save the Children" and the "One Water" campaign, which brings water to remote locations in Africa, and is on the board of the "Lupus Research Committee" in Los Angeles.