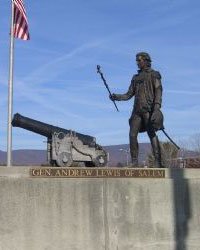 Born October 9, 1720 in County Donegal Andrew Lewis was an American pioneer, surveyor, and soldier. Son of John Lewis and Margaret Lynn he  from Virginia. He served as a colonel of militia during the French and Indian War, and as a brigadier general in the American Revolutionary War. He is most famous for his 1774 victory in the Battle of Point Pleasant in Dunmore's War.Lewis was born in County Donegal, Ireland to John Lewis and Margaret Lynn.

His father, John Lewis, killed his landlord in resisting an illegal attempt to eject him from his possessions, and came to the United States in 1732, settling in Beliefonte, Augusta County, Virginia, of which he was the first white resident. Andrew, with his brothers, early became conspicuous in the frontier struggles, and volunteered in the expedition to take possession of the Ohio region in 1754.

He was a major in Washington's Virginia regiment, and highly esteemed by the latter for his courage and skill. He was with Washington at the surrender of Fort Necessity, and, according to some authorities, at Braddock's defeat in 1755. He commanded the Sandy creek expedition in 1756, and was made prisoner in that of Major James Grant to Fort Duquesne in 1758, and taken to Montreal. In 1768 he was a commissioner from Virginia to conclude a treaty with the Six Nations at Fort Stanwix, New York In 1774, when hostilities had begun again on the western frontier of Virginia, he received the appointment of brigadier-general, and as commander-in-chief at the battle of Point Pleasant, at the mouth of Great Kanawha river, gained a victory over the Shawnee confederacy under the celebrated "Cornstalk" in what was probably the most severe engagement with the Indians that had taken place in this country up to that period. He was a member of the house of burgesses for several years, and a delegate to the Virginia conventions of May and June, 1775. When Washington was appointed commander-in-chief of the Continental army, he recommended Lewis for major-general, but the latter was overlooked, and accepted the rank of brigadier-general on 1 March, 1776, which he resigned on 15 April, 1777.

His statue occupies one of the pedestals around the Washington monument in Richmond, Virginia.. He died in Bedford county, Virginia, 26 September, 1781.