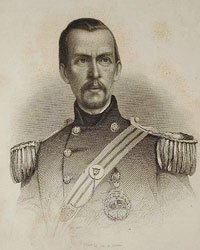 Born September 21, 1827 near Carrowkeel, Ballymoate Co. Sligo, Michael Corcoran was an Irish American general in the Union Army during the American Civil War and a close confidant of President Abraham Lincoln. As its colonel, he led the 69th New York regiment to Washington, D.C. and was one of the first to serve in the defense of Washington by building Fort Corcoran.

Many of the members of the militia unit were members of, or were very sympathetic towards the anti-British "Young Ireland" movement. The senior officer of the 69th New York Militia, Colonel Michael Corcoran, along with many other members of the 69th NYSM were founding members of the "Fenian Brotherhood", an Irish republican movement which campaigned for an Ireland free from British rule. The Co. Sligo native hit the headlines in 1860 when as Colonel of the 69th New York State Militia he refused to parade during the visit of the Prince of Wales or meet him at a ball given in his honor.

Corcoran was set to be court marshalled by the State, but luckily for him, the Rebels fired on Fort Sumter, South Carolina, the Civil War began and his presence was required to fight the Rebels and preserve the Union.He was not exchanged, instead being held under threat of retaliatory execution until August 1862.

He returned to New York to a rapturous reception and reentered the war at the head of the ‘Irish Legion’. He died on 22nd December 1863 when his horse fell on him while riding with Thomas Francis Meagher. The 28th December edition of the New York Times held an account of his funeral, and clearly demonstrates the deep affection in which he was held.