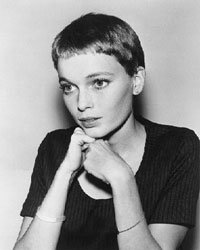 Born Maria de Lourdes Villiers Farrow on February 9, 1945 in Los Angeles, California, Mia Farrow is an American actress, singer, and former fashion model. The daughter of infamous Irish actress Maureen O'Sullivan who hails from Boyle Co. Roscommon, she was noticed for the first time in the film Rosemary's Baby 1968 by Roman Polanski. Married for a time to Frank Sinatra, Mia's her final breakthrough was when she met Woody Allen and became his Muse after the film A Midsummer Night's Sex Comedy in 1982.

Farrow has appeared in more than forty-five films and won numerous awards, including a Golden Globe award (and seven additional Golden Globe nominations), five BAFTA Film Award nominations, and a win for best actress at the San Sebastian International Film Festival. Mia Farrow has been a high profile advocate for children's rights, working to raise funds and awareness for children in conflict affected regions, predominantly in Africa. She is a UNICEF Goodwill Ambassador and has worked extensively to draw attention to the fight to eradicate polio, which she survived as a child. She is involved in humanitarian activities in Darfur, Chad, and the Central African Republic. In 2008, she was selected by Time magazine as one of the most influential people in the world.

In 2008, Farrow received three awards; the France Legion of Arts and Letters award, the Refugees International McCall-Pierpaoli Humanitarian Award for extraordinary service to refugees and displaced people and the Tiannamen Square Award.

In 2009, Farrow was the recipient of the Leon Sullivan International Service award. She testified in the trial against former Liberian President Charles Taylor in August 2010