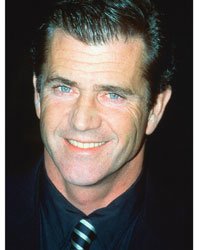 Mel Columcille Gerard Gibson was born on January 3, 1956, in Peekskill, New York, as the sixth of eleven children to parents Hutton Gibson, a railroad brakeman, and Anne Gibson née Reilly. Gibson's first name comes from Saint Mel, fifth-century Irish saint, and founder of Gibson's mother's native diocese, Ardagh, while his second name, Colm-Cille, is shared by an Irish saint and is the name of the parish in County Longford where Gibson's mother was born and raised. Because of his mother, Gibson holds dual Irish and American citizenship.

Though born in the US, Mel and his family moved to New South Wales, Australia. After high school, Mel studied at the University of New South Wales in Sydney, performing at the National Institute of Dramatic Arts alongside future film thespians Judy Davis and Geoffrey Rush. In 1987 Mel starred in what would become his signature series, Lethal Weapon in which he played "Martin Riggs". 1995 brought his most famous role as "Sir William Wallace" in Braveheart (1995), for which he won two Oscars for Best Picture and Best Director, the major battle scenes were shot in Ireland using members of the Irish Army Reserve as extras. To lower costs, Gibson had the same extras portray both armies.

In 2000 Mel Gibson kick-started a continuing relationship between Healing The Children and his family, a charity which reimburses hospitals for care given to seriously ill children who could not get treatment in their homelands due to lack of resources or money. To date the family have donated almost $17 million.

In October 2005 Gibson met with Mexican President Vicente Fox to announce that he would donate $1 million to help Mexico recover from Hurricane Stan. In 2005, Gibson donated $500,000 towards FARES's work at Mirador; he currently serves on the board of the foundation and is a spokesperson for the rainforest conservation project.