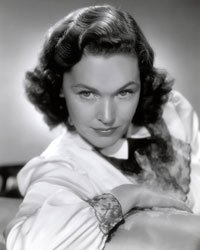 Born on the 17th of May 1911 in Boyle Co. Roscommon, Maureen O Sullivan went on to become one of the most iconic actresses of Hollywood in the 1930's and 1940's. The daughter of Mary Lovatt née Fraser and Charles Joseph O'Sullivan, an officer in The Connaught Rangers who served in The Great War, she was educated in parochial schools in London, Dublin, and Paris.

Her film career began when she was discovered by motion picture director Frank Borzage, who was in Ireland filming Song o' My Heart. He suggested she take a screen test. She did and won a part in the movie, which starred Irish tenor John McCormack. She then traveled to the United States to complete the movie in Hollywood.

Maureen appeared in six movies at Fox, all the while continuing to make movies with other studios in Hollywood. In 1932, she signed a contract with MGM.  After several roles there and with various studios, she was chosen by Irving Thalberg to appear as Jane Parker in Tarzan the Ape Man opposite Olympic gold medalist Johnny Weissmuller. Five other Tarzan films followed, the last being Tarzan's New York Adventure in 1942.

She married Australian writer John Farrow later an award-winning director and author of a history of the papacy, a life of Thomas More and a Tahitian/English dictionary with whom she had seven children.

She has a star on the Hollywood Walk of Fame at 6541 Hollywood Boulevard in Hollywood, California facing the star of Johnny Weissmuller.