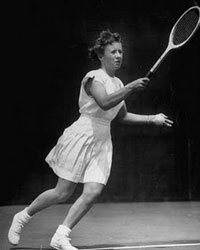 Born in San Diego, California on September 17, 1934 , Maureen Catherine Connollys father, Marten Connolly, left the family when she was a toddler. Her mother, Jassamine Connolly, told the young girl that her biological father was deceased, an untruth that caused a rift between mother and daughter later, when Connolly achieved fame and Marten Connolly resurfaced.

Connolly was raised by her mother and a stepfather, August Berste, a musician by profession. Connolly's mother, an amateur pianist herself, urged her daughter to find a career in music, but Connolly had other plans. As a youngster she grew inspired by watching tennis players at a local park. By the time she was ten years old, she asked her parents persistently for a tennis racket. Connolly's parents indulged her wish and purchased a racket for $1.50. Connolly was instantly obsessed with the sport of tennis 'Little Mo' became the first woman to win all four Grand Slam tournaments during the same calendar year, she was the youngest winner of the National Girl's Tournament at age 14. "Little Mo" won her first National Women's title in 1951. In 1953 she became the first woman to win the grand-slam (the Wimbledon, U.S., Australian, and French singles competitions).

She was named woman athlete of the year by the Associated Press three years in a row, 1951 through 1953. Just two weeks after she won the 1954 Wimbledon title, a cement truck brushed against Connolly's right leg while she was horseback riding. She was thrown to the ground and the leg was seriously damaged, ending her competitive career.

Connolly married Norman Brinker, who had been on the 1952 Olympic equestrian team, and established the Maureen Connolly Brinker Foundation to promote junior tennis. In 1966 Connolly was diagnosed with stomach cancer, from which she died at age 34 in Dallas, Texas on June 21, 1969, and was interred in the Sparkman-Hillcrest Memorial Park Cemetery in Dallas.

The “Little Mo” is a program of the Maureen Connolly Brinker Tennis Foundation which furthers junior tennis development for boys and girls 8, 9, 10, 11 & under.  The “Little Mo” began in 1976 for Dallas players and then expanded to include all players from Texas.  In 1998, the “Little Mo” expanded to a national level and the “Road to the Little Mo Nationals” was created.