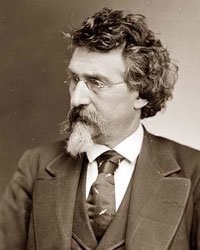 Born May 18, 1822 Mathew B. Brady was born in Warren County, New York, to Irish immigrant parents, Andrew and Julia Brady, Andrew went on to become one of the most celebrated 19th century American photographers, best known for his portraits of celebrities and the documentation of the American Civil War. He is credited with being the father of photojournalism.

Mathew Brady arrived in New York City at the age of sixteen. Soon after taking a job as a department store clerk, he started his own small business manufacturing jewelry cases. In his spare time, Brady studied photography under a number of teachers, including Samuel F. B. Morse, the man who had recently introduced photography to America. Brady quickly discovered a natural gift. By 1844, he had his own photography studio in New York.

Brady soon acquired a reputation as one of America's greatest photographers -- producer of portraits of the famous. In 1856, he opened a studio in Washington, D.C., the better to photograph the nation's leaders and foreign dignitaries. As he himself said, "From the first, I regarded myself as under obligation to my country to preserve the faces of its historic men and mothers." He became one of the first photographers to use photography to chronicle national history.

At the peak of his success as a portrait photographer, Brady turned his attention to the Civil War. Planning to document the war on a grand scale, he organized a corps of photographers to follow the troops in the field. Friends tried to discourage him, citing battlefield dangers and financial risks, but Brady persisted. He later said, "I had to go. A spirit in my feet said 'Go,' and I went."

After the Civil War, Brady found that war-weary Americans were no longer interested in purchasing photographs of the recent bloody conflict. Having risked his fortune on his Civil War enterprise, Brady lost the gamble and fell into bankruptcy. His negatives were neglected until 1875, when Congress purchased the entire archive for $25,000. Brady's debts swallowed the entire sum. He died in 1896, penniless and unappreciated. In his final years, Brady said, "No one will ever know what I went through to secure those negatives. The world can never appreciate it. It changed the whole course of my life."

Despite his financial failure, Mathew Brady had a great and lasting effect on the art of photography. His war scenes demonstrated that photographs could be more than posed portraits, and his efforts represent the first instance of the comprehensive photo-documentation of a war.