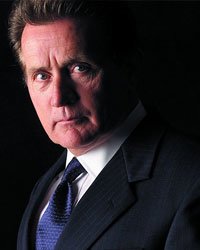 Born on August 3rd, 1940 in Dayton, Ohio known by his stage name Martin Sheen,  Martin the son of Mary Ann née Phelan, 1903–1951 and Francisco Estévez traces his roots to  Borrisokane, County Tipperary where his mother was born.

His Spaniard father, also an immigrant, settled in Ohio where he met and married his mother Mary Ann family had been involved with the Irish Republican Army. They had twelve children, two of whom died at birth; Martin was the seventh of their ten children who lived.

Starring as Army Captain Benjamin L. Willard in Francis Ford Coppola's landmark film Apocalypse Now 1979, which brought Sheen worldwide recognition, the actor has appeared in many famous blockbuster films and in recent years as American President in the critically acclaimed 'West Wing'.
In 2006 he commenced a three-year Bachelor of Arts degree in English literature, philosophy, and oceanography at the National University of Ireland (NUIG), Galway, Ireland.

Sheen adopted his stage name as a tribute to Catholic Bishop Fulton J. Sheen, and has been arrested dozens of times for acts of civil disobedience, protesting for assorted causes the Bishop would approve of. He has slept on sidewalks to raise awareness and funds for homelessness, and has spoken and marched against abortion, capital punishment, euthanasia, and American wars against Iraq. "I do it," he says, "because I can't seem to live with myself if I do not. I don't know any other way to be."