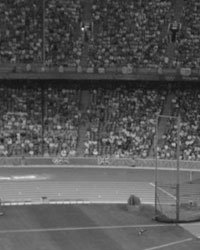 According to his obituary, Martin John Sheridan was "one of the greatest athletes this country has ever known." Born in Bohola, County Mayo, Ireland on March 28, 1881, Martin arrived to the United States in 1897. At 6'3" and 194 lbs, Sheridan became the best all-around athlete of the Irish-American Athletic Club. Like many of his I-AAC teammates, Sheridan was a member of the New York City Police Department, (1906-1918), rising from the rank of Patrolman to First Grade Detective and serving as the governor’s body guard whenever he was in NYC. Sports writers of his era proclaimed him the greatest track and field athlete of all time.


Sheridan won the discus throw event at the 1904, 1906, and 1908 Summer Olympics as well as the shot put at the 1906 Olympics and the Greek discus in 1908. At the 1906 Intercalated Games in Athens he also won silver medals in the standing high jump, standing long jump and the stone throw.

Sheridan fell victim to pneumonia, (possibly one of the first casualties of the 1918 Spanish flu pandemic) one day before his 37th birthday on March 27, 1918 in St. Vincent's Hospital in New York City.

On July 27, 1918, under the auspices of the Martin J. Sheridan Memorial Committee and the Police Department of the City of New York, athletic games and a concert were held at Celtic Park to raise funds for a Celtic Cross to mark Sheridan's grave in Calvary Cemetery. The inscription on the granite Celtic Cross monument marking Martin Sheridan's grave in Calvary Cemetery, Queens, New York says in part: "Devoted to the Institutions of his Country, and the Ideals and Aspirations of his Race. Athlete. Patriot."