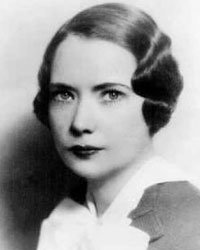 Margaret Mitchell born in Atlanta, Georgia on November 8, 1900 to Eugene Mitchell, a lawyer, and Mary Isabelle, much referred to as Maybell, a suffragist of Irish Catholic origin,  was an American author, who won the Pulitzer Prize in 1937 for her epic novel Gone with the Wind, her only major publication. Mitchell graduated from the local Washington Seminary and started to study medicine at Smith College in 1918. She had adopted her mother's feminist leanings, which clashed with her father's conservatism.

When Mitchell's mother died in 1919, she returned to home to keep house for her father and brother. Mitchell launched her career as a journalist under the name Peggy Mitchell, writing articles, interviews, sketches, and book reviews for the Atlanta Journal. Four years later, she resigned after an ankle injury. From 1926 to 1929, she wrote Gone With the Wind. The outcome, a thousand page novel, was published by the Macmillan Publishing Company in 1936. The retail price of the book was $3.00.

Mitchell's work broke sales records, its scope and vision was compared with Tolstoy's War and Peace, the New Yorker praised it, and the poet and critic John Crowe Ransom admired "the architectural persistence behind the big work", but criticized it as overly Southern, particularly in its treatment of Reconstruction.

Gone with the Wind was awarded the Pulitzer Prize in 1937, the novel is one of the most popular books of all time, selling more than 30 million copies. The film adaptation of it, released in 1939, featuring Vivien Leigh as the character of Scarlett O' Hara,  became the highest-grossing film in the history of Hollywood, receiving a record-breaking ten Academy Awards.  Mitchell has been honored by the United States Postal Service with a 1¢ Great Americans series postage stamp.