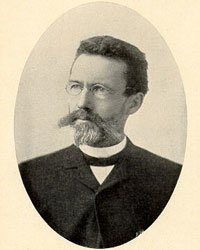 Born in 1841 in Cleveland Ohio, Joseph O Dwyer and his family were of Irish descent. He began his medical studies under the personal supervision of a general practitioner in 1863. After two years of apprenticeship he entered the College of Physicians New York from which he graduated in 1865. He won first place in the competitive examination for resident physicians of the Charity now the City Hospital of New York City on Blackwell's Island. In 1872 he was appointed to the staff of the New York Foundling Asylum.

The deaths of many children by suffocation when diphtheria brought about closure of the larynx proved too sad a sight for him, so he tried to find something to keep the larynx open. He used a wire spring and experimented with a small bivalve speculum but to no purpose. The inflamed mucous membrane and false membrane forced themselves into the interstices and the difficulty of breathing returned. Besides, the pressure produced ulceration. Finally he tried a tube.

The use of a tube for intubation had often been attempted but unsuccessfully. O'Dwyer succeeded in devising the form of tube that would remain and then ingeniously fashioned instruments for the placing and displacing of the tube. After a dozen years of diligent study this method of relieving difficulty of breathing proved successful.

Most of his medical colleagues were sure that O'Dwyer's scheme was visionary. Before his death it was universally acknowledged that he had made the most important practical discovery of his generation. His tubes and the accompanying instruments for intubation and extubation, with his methods for the care of these patients, have since come to be employed everywhere throughout the medical world.

A fervent Catholic, O'Dwyer devoted himself to the study of pneumonia, later in his career. His work at the Foundling Hospital helped greatly to make that institution one of the best of its kind.