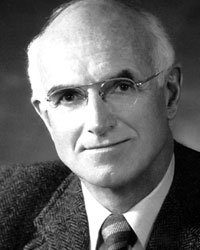 Joesph Murray born 1919, in Millford, Mass. his Irish heritage can be traced back to 3rd generation on his father’s side. His father who was a lawyer and a district court judge imparted the importance of education to his son.

After attending Harvard Medical School he joined the army and was assigned to Valley Forge Hospital where he spent his military service and developed his fascination for burns and tissue reconstruction.

After additional training at Sloane-Kettering Memorial Hospital in New York, he returned to the Peter Bent Brigham Hospital in Boston where he remained for the rest of his professional career. He was director of the surgical laboratory at Harvard Medical School for 20 years where he worked and developed pioneering advances in transplantation.

In 1990, for his pioneering contributions and exhaustive work over the course of his career, Joseph Murray was awarded the Nobel Prize in Medicine which he shared with Thomas E. Donnell.