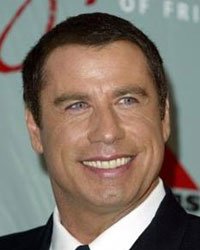 Born John Joseph Travolta on 18 February 1954 in Englewood, New Jersey, to Catholic parents, the infamous Saturday Night Fever/ Grease actor can race his Irish roots on his maternal side to his great grand father James Burke who was born in Ireland Aug 1854.

His Irish/American mother, Helen Cecilia Burke appeared in The Sunshine Sisters, a radio vocal group, and acted and directed before becoming a high school drama and English teacher. Growing up in an Irish-American neighborhood in a household that was predominantly Irish in culture, Travolta shot to stardom for his role as Vinnie Barbarino in the hit TV series Welcome Back Kotter. The following year, he won the lead in the critically acclaimed TV movie, The Boy in the Plastic Bubble. International fame came with two successive box-office hits, Saturday Night Fever (1977) and Grease (1978). He earned an Oscar nod for his role in the former, becoming an icon for disco nightlife and ‘70s culture.

In 1994, Travolta made a career comeback when he starred in Quentin Tarantino’s crime smash Pulp Fiction. He earned his second Academy Award nomination and went on to win a Golden Globe for his performance in the critically acclaimed film Get Shorty.

In September 2005 Travolta and his wife, actress Kelly Preston, flew in their own private jet to deliver five tons of food for victims of Hurricane Katrina. John, an experienced pilot, flew the supplies to Baton Rouge, Louisiana, then toured the flooded city of New Orleans and visited rescue workers and shelters for evacuees. The two movie stars also brought along 400 doses of vaccines for rescuers. By coordinating with Oprah Winfrey, John and Kelly were able to get even more relief for the more than million people affected by one of the worst storms in U.S. history.

Following the death of his son in 2009 the Travolta family set up The Jett Travolta Foundation a charity which endeavors to use its resources specifically to assist and provide relief to children with vision, hearing, mobility, communication, behavior learning impairments or other special medical, environmental, health or educational needs.