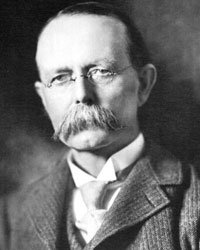 Seán Pilib Ó hUallacháin / Ó Maolchalann born 29 February, 1840 was an Irish engineer who developed the first submarine to be formally commissioned by the U.S. Navy, and the first ever Royal Navy submarine, the Holland. He was one of four brothers who may have been born in Liscannor, County Clare, Ireland to an Irish speaking mother, Máire Ní Scannláin, and John Holland, and learned English properly only when he attended the local English-speaking National School system and, from 1858, in the Christian Brothers in Ennistymon.

He emigrated to the United States in 1873 and continued to pursue his research on submarines. The United States Navy rejected his plans in 1875, but the American Fenian Society, a group of Irish patriots who hoped to undermine England's naval power and gain independence for Ireland, commissioned Holland to build a submarine. Holland's first model sank during testing, but the second model, the Fenian Ram, was successfully launched in 1881. A full-scale vessel, the Fenian Ram had many of the features we associate with modern submarines. The cigar-shaped sub used electrical power for propulsion under water and had an internal combustion engine for surface propulsion. It was fitted out with torpedos and had mechanisms to steady the craft after firing. Previously designed subs submerged by sinking, but rudder planes on the Fenian Ram allowed the craft to dive by inclining its axis.

Holland tried to interest the US Navy in his work once again, and in 1895 the J.P. Holland Torpedo Boat Company was awarded a navy contract for his submarine, the Plunger. The vessel, in Holland's trademark fat-cigar shape,was to be 85 feet long, again with a small conning tower. A great many design changes were carried out without Holland's approval during building in 1898, and  as a consequence, the sub performed so badly that the project was abandoned during the first trials.

While the Plunger was in production, Holland scraped together enough money to build a submarine on his own, the Holland no. 8. This craft, almost 56 ft. long, was small and light when compared to submarines being developed by the French. It improved upon all the engineering advances of the Fenian Ram. The internal combustion engine for surface power also served to charge the batteries for the electrical engine that powered the craft under water. In this way, the submarine had a greatly increased range, not having to return to shore to recharge batteries.The Holland could dive and remain submerged for four hours. Surface speed was 8 knots while submerged speed was 5 knots. The craft was fitted out with a torpedo tube and dynamite gun. The Navy promptly commissioned several of the subs in 1900 when testing proved successful.

Holland's company continued to supply the US navy with many submarines over the years and has built subs for many other countries besides. Great Britain became interested in Holland's work in the early 1900s, commissioning several submarines. Russia and Japan also bought vessels from the Holland Boat Company.