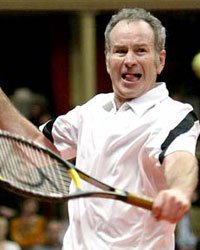 McEnroe was born in Wiesbaden, West Germany,on February 16, 1959 to Kay (née' Tresham) and John Patrick McEnroe, Sr. His father, who is of Irish descent, was at the time stationed with the United States Air Force.

In 1960, the family moved to the New York City area, where McEnroe's father worked daytime as an advertising agent while attending Fordham Law School by night.

McEnroe grew up in Douglaston, Queens. He started playing tennis when he was eight years old at the nearby Douglaston Club with his brothers. When he was nine, his parents enrolled him in the Eastern Lawn Tennis Association, and he soon started playing regional tournaments. He then began competing in national juniors tournaments, and at twelve—when he was ranked seven in his age group—he joined the Port Washington Tennis Academy, Long Island, New York.

One of the greatest tennis players of all time, at only 20, John won the U.S. title for the first time over fellow New Yorker Vitas Gerulaitis, the youngest winner since Pancho Gonzalez, also 20, 31 years before. He won seven Grand Slam singles titles - -three at Wimbledon and four at the US Open, 77 career singles titles, was ranked No. 1 for four straight years from 1981 to 1984.

Theses days he is a commentator and tennis analyst on television.