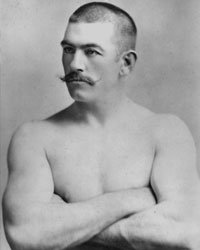 Born to Irish immigrant parents, Michael Sullivan from Abbeydorney, County Kerry and Catherine Kelly from Athlone, County Westmeath,  Sullivan on June 26, 1880, with just a handful of fights to his credit, challenged anyone in America to fight him for $500.

In 1883-1884 he toured with a circus, offering $500 to anyone who could last one round with him. Depending on which authorities are consulted, Sullivan became world heavyweight champion in 1888 when he defeated Charley Mitchell in France, or the following year when he knocked out Jake Kilrain in round 75 of a scheduled 80 round bout.  That fight is considered to be a turning point in boxing history because it was the last world title bout fought under the London Rules and also, the last bare-knuckle heavyweight title bout. Undefeated at that point, Sullivan did not defend his title for the next three years, fighting exhibitions instead. He finally agreed to defend his title in 1892 -- this time in a gloved battle, losing to Gentleman Jim Corbett in 21 rounds.

Sullivan retired, but became a stage actor, speaker and bar owner. In his later years Sullivan became a teetotaler and often supported the temperance movement.

Sullivan was inducted into the International Boxing Hall of Fame in 1990, as a member of the hall's original class. He was the first Irish-American sports hero to become a national celebrity and the first American athlete to earn over one million dollars.