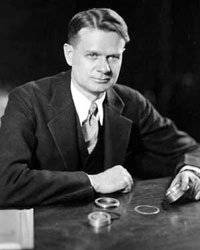 Born in Ireland, on July 8, 1894 - Pasadena, John G. Frayne was a physicist and sound engineer.

He received his Ph.D. in physics from the University of Minnesota while working at the Bell Laboratories. Among his technical achievements were the development of sound recording techniques and their reproduction for optical sound recording systems, which led to stereo-optical formats used by films in the 1970s and '80s; co-invention of the sphere densitometer, which won a Scientific or Technical Academy Award in 1941; the co-invention of the stereo disc cutter which was standard in the recording industry, and the co-invention of the inter-modulation techniques of distortion measurements, which won him an Academy Award in 1953.

John G. Frayne, a scientist and educator who was awarded two Academy Awards over the course of his lifetime for his contributions to sound motion pictures, wrote in 1949 with Halley Wolf the classic textbook entitled Elements of Sound Recording.

Dr. Frayne, a Fellow of the Audio Engineering Society (AES), received its Gold Medal Award for Outstanding Achievement in advancing the art of audio engineering in 1976.

Frayne, who held a doctorate in mathematics was a pioneer in the field of minimizing sound distortion in films. He was a former president of the Society of Motion Picture and Television Engineers and became involved in the early days of sound pictures while a research fellow and physicist at Caltech.