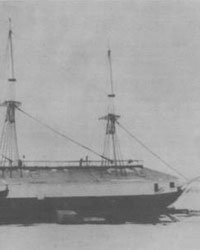 Cooper was a Coxswain, the man in charge of the rowing crew, and directing the speed and rhythm of the rowers. Cooper received his first award for service while on board the U.S.S. Brooklyn during action against rebel forts and gunboats. This was during the battle of Mobile Bay. His first citation read:

Cooper then went on to earn a second Medal of Honor for a selfless act of courage and bravery during the terrible accidental fire at Mobile. He proved himself to be a true hero and saved a man's life in the process.