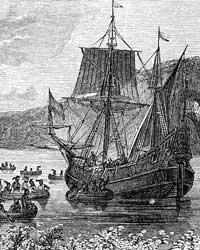 Born in Ireland John Colman was an Irish sailor on Henry Hudson's Half Moon, Not alot is known about his life as a sailor and his jouney from Ireland to America, however he has made a very important mark in American history.

Colman was an "accomplished sailor" and served as second mate on Henry Hudson's ship. The Half Moon sailed into New York Harbor and was anchored between Coney Island and Sandy Hook. Colman was part of a 5 man crew that was aboard a rowboat that was scouting the area.

He was killed in a clash with Native Americans Indians on the coast of New Jersey in 1609 by an arrow to his neck. It is the first recorded murder in what became New York City. The place where he died was named Coleman's Point, but is now known as Sandy Hook. Coleman was buried at Coney Island.

On September 6, 1609, only four days after the arrival of the first Dutch and English sailors, John Colman was buried that either on Coney Island, Staten Island, Sandy Hook or at what is now Keansburg, New Jersey. The forgotten location was then named Colman's Point.

The murder of John Colman was the basis for a poem by Thomas Frost, "The Death of Colman", where he writes:

Then prone he fell within the boat,
A flinthead arrow through his throat
And now full many a stealthy skiff
Shot out into the bay;
And swiftly, sadly, pulled we back
To where the Half Moon lay;
But he was dead our master wept
He smiled, brave heart, as though he slept.

His death is commemorated by a mural at the Hudson County, New Jersey courthouse in Jersey City.