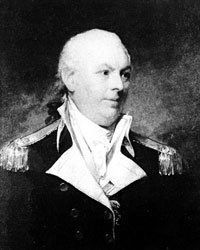 Born March 25, 1745 John Barry was an officer in the Continental Navy during the American Revolutionary War and later in the United States Navy. Often credited as "The Father of the American Navy". Barry was born in a modest thatched cottage in 1745 at Ballysampson on Our Lady's Island, which is part of Tacumshin Parish in County Wexford, Ireland. Barry's father was a poor tenant farmer who was evicted by his British landlord. The family was forced to relocate to the village of Rosslare.

At Rosslare, the youth's uncle, Nicholas Barry, was captain of a fishing skiff, and the young man determined at an early age to follow his uncle to sea. Barry started out as a ship's cabin boy, and graduated from seaman to able seaman and ultimately, a Mate's rating. Barry grew to be a tall, muscular, well-respected seaman. A salient event which occurred in Barry's youth led to a lifelong enmity of oppression and the British.

At a young age Barry learned of the massacre of some 3,000 Wexfordians under an invading force led by Oliver Cromwell in 1649. Ireland and appointed a Captain in the Continental Navy on December 7, 1775. Few Americans are well-acquainted with the gallantry and heroic exploits of Philadelphia's Irish-born naval commander, Commodore John Barry. Barry remains to this day an unsung hero of the young American Republic.

In the space of 58 years, this son of a poor Irish farmer rose from humble cabin boy to senior commander of the entire United States fleet. Intrepid In battle, he was humane to his men as well as adversaries and prisoners. Barry's war contributions are unparalleled: he was the first to capture a British war vessel on the high seas; he captured two British ships after being severely wounded in a ferocious sea battle; he quelled three mutinies; he fought on land at the Battles of Trenton and Princeton; he captured over 20 ships including an armed British schooner in the lower Delaware; he authored a Signal Book which established a set of signals used for effective communication between ships; and he fought the last naval battle of the American Revolution aboard the frigate Alliance in 1783.


Barry's first command came in 1766 aboard the schooner, Barbadoes, sailing out of Philadelphia, which Barry adopted as his home port. Barry had good reason to make Philadelphia his new home. William Penn's legacy of religious freedom allowed Roman Catholics, which Barry was, greater latitude of worship than most anywhere else in the Colonies

Further, the city was emerging as a great maritime trade center. Its growing population, which exceeded 30,000 by the start of the Revolution, hungered for imported goods brought in by ships piloted by captains such as Barry. Plying back and forth between Philadelphia and the West Indies, Barry gained his early skills of command at the helm of several merchant ships. The Barrys had no children; however, they happily raised two boys from Barry's deceased sister Eleanor's household.

Sarah's nephews from Ireland, Michael and Patrick Hayes, were brought to Philadelphia by Captain John Rosseter on his ship, the Rising Sun. Rosseter was a neighbor of the Barry family in Ireland, and the captain also wound up living on the same street as John Barry in Philadelphia. His close association with the Barrys continued even in death, as the Rosseter plot lies next to the Barry plot in Old St. Mary's churchyard.

When Barry arrived back in Philadelphia on the Black Prince he was greeted with the word that the Colonies and Great Britain were at war. At the outset of the Revolution, Barry was given the singularly important task of outfitting the first Continental Navy ships which were put to sea from Philadelphia. His assignment included: overseeing rigging, piercing gunports, strengthening bulwarks, procuring powder and canvas for the new warships and loading provisions. Upon completion of his work, Barry was rewarded with what he most desired from the Marine Committee: a Captain's commission in the Continental Navy, dated March 14, 1776, and signed by the President of Congress, John Hancock. Along with this commission went command of Barry's first warship, the brig Lexington. John Barry was so well-regarded during his lifetime that when President Jefferson retrenched the military establishment, Barry's services were retained.

Despite being so engaged with naval matters, Barry was active socially while on land. He was a member of the Friendly Sons of St. Patrick and the Hibernian Fire Company. Barry's contributions to the nascent navy were singular. He authored a Signal Book in 1780, which established a set of signals to be used for effective communication between ships voyaging in squadron formation. Barry also suggested the creation of a Department of the Navy with separate cabinet status from the Secretary of War. This was finally realized with the formation of the United States Department of the Navy in 1798.

Barry remained head of the Navy until his death on September 12, 1803, from the complications of asthma. On September 14, 1803, John Barry received his country's salute in a full military burial in Philadelphia's Old St. Mary's Churchyard. Such was the man, John Barry, a gallant mariner who served his Nation well and stood tall in the annals of American naval history.