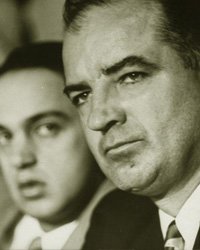 Joseph McCarthy was born on a farm in Appleton, Wisconsin, on 14th November, 1908. His parents were devout Roman Catholics and Joseph was the fifth of nine children. His mother, Bridget Tierney, was from County Tipperary, Ireland. His father, Timothy McCarthy, was born in the United States, the son of an Irish father and a German mother.

Joesph left school at 14 and worked as a chicken farmer before managing a grocery store in the nearby town of Manawa, returning to high school in 1928 and after achieving the necessary qualifications, won a place at Marquette University to study law. After graduating McCarthy was originally a supporter of Franklin D. Roosevelt and the New Deal. However, after failing to become the Democratic Party candidate for district attorney, he switched parties and became the Republican Party candidate in an election to become a circuit court judge. McCarthy shocked local officials by fighting a dirty campaign.

When the United States entered the Second Word War McCarthy resigned as a circuit judge and joined the U.S. Marines. After the war McCarthy ran against Robert La Follette to become Republican candidate for the senate.
In his campaign, McCarthy attacked La Follette for not enlisting during the war. He had been forty-six when Pearl Harbor had been bombed, and was in fact too old to join the armed services. McCarthy also claimed that La Follette had made huge profits from his investments while he had been away fighting for his country. The suggestion that La Follette had been guilty of war profiteering (his investments had in fact been in a radio station), was deeply damaging and McCarthy won.

On his first day in the Senate, McCarthy called a press conference where he proposed a solution to a coal-strike that was taking place at the time. McCarthy called for John L. Lewis and the striking miners to be drafted into the Army. If the men still refused to mine the coal, McCarthy suggested they should be court-martialed for insubordination and shot.

The term McCarthyism, coined in 1950 in reference to McCarthy's practices, was soon applied to similar anti-communist activities. Today the term is used more generally in reference to demagogic, reckless, and unsubstantiated accusations, as well as public attacks on the character or patriotism of political opponents.