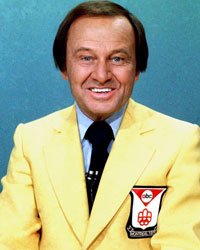 Born September 24, 1921, James Kenneth McManus , better known by his professional name of Jim McKay, was an American television sports journalist. McKay was born in Philadelphia, Pennsylvania, and raised in the Overbrook section of the city in an Irish American Roman Catholic family. He attended Our Lady of Lourdes Grade School and Saint Joseph's Preparatory School.

At the age of 14 his family moved to Baltimore, Maryland, where he attended Loyola Blakefield high school. He received a bachelor's degree from Loyola College in Maryland in 1943.During World War II, he served in the United States Navy as the captain of a minesweeper.
There are few commentators with accolades to match those of Jim McKay,he earned distinction as the first sports commentator honored with an Emmy Award. McKay built on his reputation of excellence and went on to receive a total of thirteen Emmy Awards, and further distinguished himself as the first, and only, broadcaster to win Emmy Awards for both sports and news broadcasting as well as for writing.

Although CBS gave McKay his broadcasting break, it was ABC Sports, under the leadership of Roone Arledge, that provided McKay the opportunity to flourish. During the 1950s, McKay covered events ranging from international golf and horse racing events to college baseball. McKay, and ABC colleague Howard Cosell, gave ABC the most comprehensive sports programming available on television.

McKay is best known for hosting ABC's Wide World of Sports (1961–1998). His introduction for that program has passed into American pop culture. He is also known for television coverage of 12 Olympic Games, and for his reporting on the Munich massacre at the 1972 Summer Olympics.