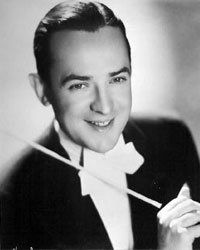 The older of the two Dorsey brothers was a child prodigy who began his musical career at the age seven playing the slide trumpet and cornet with his father's brass band at local parties. His father was a working class Irishman who wanted a better life for his children and made them study music, diligently. By the time he was 17, Jimmy was playing with the Jean Goldkette band with Bix Beiderbecke and Frankie Trumbauer.

During the 1920's the Goldkette Orchestra had broken up, and Jimmy, along with Bix and Trumbauer joined Paul Whiteman's group. Jimmy left Whiteman's group and freelanced around playing with Red Nichols. In 1933 Jimmy and younger brother Tommy formed their famous Dorsey Brothers Orchestra which included drummer Ray McKinley, trombonist Glenn Miller and singer Bob Crosby.

By 1935, continued feuding between the two brothers led to a break-up of the band. In 1938 Jimmy participated in some of the infamous Friday afternoon jam sessions at the Park Lane Hotel organized by Eddie Condon which included Pee Wee Russell, Sidney Bechet, Bobby Hackett, Willie "The Lion" Smith, Bud Freeman, Hot Lips Page, Bunny Berigan and Red Allen.

Jimmy began a new band which was a commercial success featuring popular singers Helen O'Connell and Bob Eberly. In 1953, a few years after the release of the motion picture "The Fabulous Dorseys", Jimmy and Tommy reunited and continued playing together until Tommy's death in 1956. Jimmy continued leading the band until ill-health forced him to retire from music permanently. He died in mid-1957.

Gaelic Storm :
Most famous for their appearance in the film Titanic, Gaelic Storms, touring over 125 dates per year, routinely breaks attendance and merchandise sales records, headlining the world's largest Celtic festivals as well as mainstream events such as The Rock Boat, Ships N Dips and the Cayamo Songwriter's Cruise. The band has headlined the world's largest Irish Festival, Milwaukee Irish Fest, for 6 straight years, playing to crowds of 15,000 per performance and breaking the festival's policy of not inviting artists to perform in consecutive years.  In June 2008, Gaelic Storm expanded their touring to include Australia, kicking off their tour at the National Celtic Festival outside Melbourne.

Lead singer Patrick Murphy was born and raised in Co. Cork Ireland,  His mother and father; Nora and Noel and are still living in Cork. Noel served in the US Army from 1959 to 1961 and Nora was a flight attendant for American Airlines. They immigrated back to the Ireland in 1964.

The first single "Raised on Black and Tans" of one of their albums is about Irish-Americans who have never been to Ireland but feel it's in their blood.

In 2008 Hallmark released a special St. Patrick's Day "soundcard" in the US and the UK featuring the original Gaelic Storm song "Kiss Me I'm Irish." The group also recorded a version of their "Scalliwag" in Simlish, the official language of the Sims video game world, which appeared in two EA Sports Sims games. Gaelic Storm is likely the most-seen Irish-influenced band in the world, given their performance as the steerage band in the film 'Titanic.'