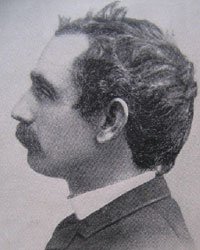 Born July 30, 1855 James Edward Kelly was an American sculptor and illustrator who specialized in depicting people and events of American wars, particularly the American Civil War. Born in New York City, Kelly studied at the National academy of design and at the Art students' league, and also acquired a knowledge of wood-en-graving.

In 1875 he opened a studio with Edwin A. Abbey, and there made numerous drawings for the magazines and Bryant and Gay's " History of the United States." In 1878 he was commissioned 1)y a publishing-house to prepare a series of portraits of the distinguished generals of the civil war. Among these were Grant, Sherman, Sheridan, Hooker, Hancock, and Ord. In addition to making portrait studies, sketches and studies were made, from life in each case, for pictures of remarkable incidents in the careers of these officers, the models themselves furnishing all details. During the progress of this work he made the statuette of "Sheridan's Ride," which was shown in the exhibition of the National academy in 1879.

In 1883 he was chosen from among many competitors to make the five bass-reliefs which surround the base of the Monmouth battle monument. The subjects selected were "Council of War at Hope-well," '" Washington rallying the Troops," "Ramsay defending his Guns," "Molly Pitcher," and " Wayne's Charge." Later he obtained the first prize in the competition for the Paul Revere monument in Boston, but the work was subsequently assigned to a local artist. In 1886 he modelled the panel "Schuyler surrendering his Plans to General Gates before the Battle of Saratoga.," for the Saratoga monument.