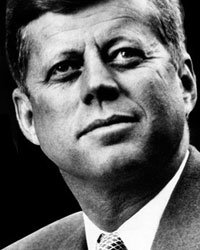 John Fitzgerald "Jack" Kennedy, born at 83 Beals Street in Brookline, Massachusetts, on May 29, 1917 and often referred to by his initials JFK, aged 43 was the youngest man and the first Roman Catholic to be elected the 35th President of the United States, serving from 1961 until his assassination in 1963. The second son of Joseph P. Kennedy, Sr., and Rose Fitzgerald; Rose, in turn, was the eldest child of John "Honey Fitz" Fitzgerald, a prominent Boston political figure who was the city's mayor and a three-term member of Congress. Kennedy lived in Brookline for ten years. In 1927, the family moved to 5040 Independence Avenue in Riverdale, Bronx, New York City; two years later they moved to 294 Pond field Road in Bronxville, New York.  Kennedy spent summers with his family at their home in Hyannisport, Massachusetts, and Christmas and Easter holidays with his family at their winter home in Palm Beach, Florida.

Kennedy defeated then Vice President and Republican candidate Richard Nixon in the 1960 U.S. presidential election, one of the closest in American history. He was the second-youngest President (after Theodore Roosevelt), the first President born in the 20th century, and the youngest elected to the office, at the age of 43. Kennedy is the only Catholic, and the first Irish American, president, and is the only president to have won a Pulitzer Prize. Events during his presidency included the Bay of Pigs Invasion, the Cuban Missile Crisis, the building of the Berlin Wall, the Space Race, the African American Civil Rights Movement and early stages of the Vietnam War.

Kennedy was assassinated on November 22, 1963, in Dallas, Texas. Lee Harvey Oswald was charged with the crime but was shot and killed two days later by Jack Ruby before any trial. The FBI, the Warren Commission, and the House Select Committee on Assassinations (HSCA) concluded that Oswald was the assassin, with the HSCA allowing for the probability of conspiracy based on disputed acoustic evidence. Today, Kennedy continues to rank highly in public opinion ratings of former U.S. presidents.

J.F Kennedy met his future wife, Jacqueline Bouvier, First Lady, her background was half-Irish, her mother being the granddaughter of four immigrants from County Cork, who came to New York during the 1840's potato famine, when he was a congressman. They were married a year after he was elected senator, on September 12, 1953. Kennedy and his wife were younger in comparison to the presidents and first ladies that preceded them, and both were popular in ways more common to pop singers and movie stars than politicians, influencing fashion trends and becoming the subjects of numerous photo spreads in popular magazines.

The Kennedy family is one of the most established political families in the United States, having produced a President, three senators, and multiple other Representatives, both on the federal and state level. Jack Kennedy's father, Joseph P. Kennedy, was a prominent American businessman and political figure, serving in multiple roles, including Ambassador to the United Kingdom, from 1938 to 1940.