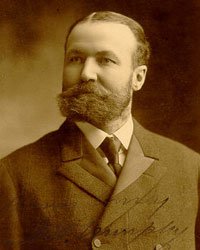 Dr John Benjamin Murphy was born December 21st in Appleton, Wisconsin. His parents, Michael Murphy and Ann Grimes Murphy, were Irish immigrants who escaped from the famine. The youngest of five children his mother decided education was the most basic method to improve their status in life and enure success. During his career he quoted his mother  "If you are educated, there is no mans achievements which you cannot equal or excel provided you have industry and integrity and are temperate."

Murphy graduated from high school in 1876 and pursued a career as a teacher for one year while he began studying medicine with his preceptor, Dr. H. W. Reilly.  He graduated from Rush Medical College in 1879, interned at Cook County Hospital in Chicago for one year and began a medical practice with Dr. Edward W. Lee. After Murphy spent two more years in Europe studying medicine, he served as a lecturer in surgery at Rush Medical School.  He ultimately served Rush, Northwestern and the College of Physicians and Surgeons, the three leading medical schools in Chicago, as a Professor of Surgery, from 1892 until his death.

He became one of the words first individuals to perform an appendectomy from where the medical jargon 'Murphys Sign' was derived, a phrase which is still used to day. Further accomplishments included being one of the worlds first surgeons to resect a major human artery. He contributed much research in ares such as thoracic surgery, neurosurgery, gynecologic surgery, plastic surgery, orthopedic surgery and education.

Dr. J.B. Murphy is an iconic figure in the history of the American College of Surgeons.  A Founder and leader in the development of the College, he had a brilliant surgical career for decades. College. He survived only its first few years of existence, after which the J.B. Murphy Memorial building was built in his honor.