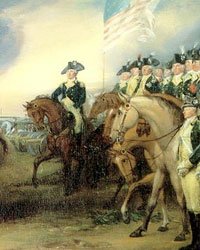 Hercules Mulligan born in 1740 was the son of an Irish immigrant to New York City. Hercules, an illustrious cloth merchant, used his trade to gather intelligence for General George Washington during the American Revolution, appointed Washington s chief "confidential agent." While posing as a collaborator during the British occupation of the city, he provided the American commander with vital information on the enemy's plans and movements. British soldiers and officers often came to his shop to have their uniforms and outfits made, while Hercules coaxed information out of them.

This information would in turn be sent to General Washington, who relied heavily upon such intelligence. The British officers felt safe around Mulligan, since he was the son-in-law of one of the British naval officers. But Mulligan and his wife were strong but secret patriots in a neighborhood of Tories (NYC is still a haven of the enemies of patriots!).

Though his patriotism was not widely known among the NYC neighborhood, it was well known by his American friends. During the 1760’s, when many political leaders were still trying to reconcile with England, Mulligan saw clearly that war was the only way to end the dispute between the American colonies and the “mother country,” and believed that petitions and boycotts were not going to convince the British to change their tyrannical ways.

So he became involved in armed militia companies. For instance, Mulligan had participated in a New York “Sons of Liberty” militia club, one of the first to spring up in America. This group fought the first battle of the American Revolution, the Battle of Golden Hill, in 1769. Mulligan was a member of many other patriotic organizations throughout the City and State. During the early 1770s, before the actual outbreak of the Revolution, Mulligan was responsible for nourishing the patriotism of his young friend Alexander Hamilton, who was then residing in Mulligan’s home

During the Revolutionary War, Hercules Mulligan served as an important member of the Culper Spy Ring, a secret group that transmitted vital military intelligence to General Washington, using invisible ink, pseudonyms, and other methods of secret correspondence.

During Washington’s presidency several years later, the business tables of Hercules Mulligan changed. No longer did he have to hide his patriotism and sell fine fabric to British officers — now President Washington patronized Mulligan’s shop! Hercules Mulligan is an example of staunch patriotism and bravery. Mulligan played an important role in the progress and success of the American Revolution.