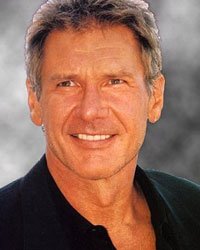 Born July 13, 1942 in Chicago, Illinois, Harrison Ford was raised in the suburbs of Chicago, by his Irish father Christopher, a local advertising executive who sometimes worked as a radio actor.

Harrison Ford studied English at Ripon College in Wisconsin. He served a long apprenticeship in film and television, interspersed with employment as a carpenter, before finding success in George Lucas 'American Graffiti in 1973.

Ford collaborated with Lucas again for his breakthrough role as Han Solo in Star Wars (1977) and its two sequels, The Empire Strikes Back (1980) and Return of the Jedi (1983). Cast as a resourceful, swashbuckling hero, he found great popularity as the archaeologist adventurer Indiana Jones in a series of films beginning with Raiders of the Lost Ark (1981). He received an Academy Award and Golden Globe nominations for his role as John Book in Witness 1985.

He is a longtime supporter of liberal and environmental causes, and testified before the Senate in a failed attempt to prevent Communist China from being granted "Most Favored Nation" status. In honor of his work for conservation causes, two species of animals have been named for Ford, a Central American ant (Pheidole harrisonfordi) and an eight-eyed spider (Calponia harrisonfordi).
Ford’s overwhelming passion is the environment.