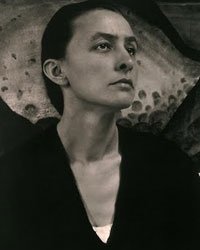 Born on November 15, 1887 near Sun Prairie, Wisconsin, Georgia 'Totto' O' Keeffe was an American artist and a major figure in American art from the 1920. The second of seven children her father Francis Calyxtus O'Keeffe was an Irish dairy farmer and her mother Ida Totto O'Keeffe was Hungarian.

During her early years in New York City, O'Keeffe began working primarily in oil, which represented a shift away from her having worked in watercolor in the 1910s. By the mid-1920s, O'Keeffe began making large-scale paintings of natural forms at close range, as if seen through a magnifying lens.

During the 1920s, O'Keeffe made both natural and architectural forms the subject of her work. In 1924 she painted her first large-scale flower painting Petunia, No. 2, which was first exhibited in 1925. She quickly completed a significant body of paintings of New York buildings, such as City Night and New York—Night, 1926, and Radiator Bldg—Night, New York, 1927.


Beginning in 1923, Stieglitz organized annual exhibitions of O'Keeffe's work. By the mid-1920s, O'Keeffe had become known as one of America's most important artists. Her work commanded high prices; in 1928 six of her calla lily paintings sold for $25,000 US dollars, which was the largest sum ever paid for a group of paintings by a living American artist. This drew media attention to O'Keeffe as never before.

In 1962, O'Keeffe was elected to the fifty-member American Academy of Arts and Letters. In the fall of 1970, the Whitney Museum of American Art mounted the Georgia O'Keeffe Retrospective Exhibition, the first major showing of her work since 1946, the year Stieglitz died. This exhibit did much to revive her public career. It brought O'Keeffe to the attention of a new generation of women raised on the principles of feminism.

On January 10, 1977, President Gerald R. Ford presented O'Keeffe with the Presidential Medal of Freedom, the highest honor awarded to American citizens. In 1985, she was awarded the National Medal of Arts.