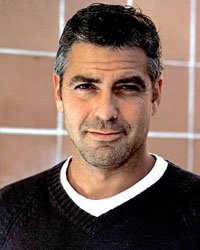 George Timothy Clooney born May 6, 1961 is an American actor, film director, producer, and screenwriter. His paternal great-great-grandparents, Nicholas Clooney of County Kilkenny and Bridget Byron, immigrated to the United States from Ireland. Born and raised in Lexington, Kentucky, Clooney was nephew to famous singer Rosemary Clooney.

Clooney, who first shot to stardom with his part as Dr. Doug Ross in the long running drama E.R, has received two Golden Globe Awards and an Academy Award. Off screen he is noted for his social activism and contribution to charitable causes serving as one of the United Nations Messengers of Peace since January 31, 2008. The son of American TV anchor Nick Clooney, George has also campaigned for a resolution for the Darfur conflict where after making his first trip to in 2006 with his father, he made the TV special "A Journey to Darfur" and advocated for action in the US. The documentary was broadcast on American cable TV as well as in the UK and France. In 2008, it was released on DVD with the proceeds from its sale being donated to the International Rescue Committee.

Clooney has used his international connections in both his acting and humanitarian work to raise
funds for the 2010 Haiti earthquake, 2004 Tsunami and 9/11 victims.