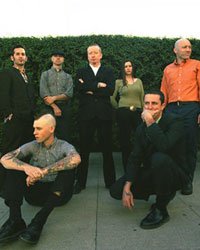 Founded in Los Angeles in 1997 by the Irish expatriate Dave King, Flogging Molly got its start (and its name) from a local Hollywood bar called Molly Malone's, where each week the band performed, grew their following, and laid down the blueprint for its eventual success. As every member of Flogging Molly will emphatically explain, there were no predetermined expectations for the band's sound. From week to week, as the crowds and the set list grew, the sound simply evolved organically. Traditional Celtic instruments like violin, mandolin and accordion blended seamlessly with grinding guitars and pounding drums. Without consciously attempting it, Flogging Molly merged the music of King's childhood in Dublin with the music of his adulthood in L.A.

Drawing on the hardships and joys of their own lives and a musical history ranging from old world Celtic to modern day punk rock, Flogging Molly came together as a musical amalgam that didn’t fit into any prescribed musical categories. With a sound anchored in such diverse influences, Flogging Molly was not initially embraced by the mainstream music industry, a fact that in the early days often found them on the outside looking in, yet now seems nothing more than a footnote in their rise to success. The band simply didn't fit any preconceived notions of what a "successful" band was.

The debut album featured the anthemic "Likes of You Again" and "Black Friday Rule" along with the best ode to a hangover yet, "The Worst Day Since Yesterday" which later found its way into the Angelina Jolie-Brad Pitt film, Mr. and Mrs. Smith. The album obliterated initial expectations and sold over 50,000 copies in its first year. Flogging Molly headed back into the studio to record their 2002 follow up, Drunken Lullabies (now certified by the RIAA as ‘gold’ for over 500,000 US albums sold), which included instant classics like the rousing "Rebels of the Sacred Heart" and the doleful "The Son Never Shines (on Closed Doors)".  In 2006 their song 'If I Ever Leave this World Alive' featured on the blockbuster hit film 'P.S I Love You'.