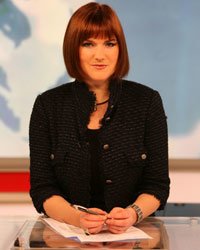 Born in 1965 in Belfast, Northern Ireland Fionnuala Sweeney and her family when they moved to Dublin when she was 12. She spent many school holidays in Glendowan, County Donegal and she still visits Donegal regularly. Sweeney studied at St. Dominic's High School, before moving to Dublin, where she was a pupil at Alexandra College. She later studied Journalism at the National Institute for Higher Education (now DCU), and she graduated with a bachelor's degree in English and History and a Higher Diploma in Education at the University College Dublin.

A television journalist, Sweeney spent five years at RTÉ. She became famous as the host of the 1993 Eurovision Song Contest, which was seen by 350 million people.

Sweeney joined CNN from RTE and was the launch anchor of ‘World News Europe’, having previously launched ‘CNN This Morning’ in September 1997, the network’s first European breakfast news program. As an anchor for ‘World News’, she covered major stories including the humanitarian crisis in Zaire, the Docklands bomb in London, the Bosnian conflict, the British elections and the ongoing crisis in the Middle East.

Moving on up the ranks she secured a position as anchor and correspondent for CNN International, based at the network's headquarters in Atlanta, Georgia. She anchors 'World One', the fast-paced international news bulletin that airs during CNNI's European prime-time lineup.

Sweeney, has reported on major news events from around Europe and the Middle East. She anchored a week-long series of programs from Poland in October 2008, and has since been involved in presenting special coverage of Gaza from Israel; reporting on the Israeli elections from Jerusalem; and presenting from the epicenter of the Italian earthquake in L'Aquila. Sweeney returned to Poland in June 2009 to mark the 20th anniversary of the fall of Communism for CNN's Autumn Of Change programming initiative. She also anchored ‘World One’ from Prague and Bucharest as part of that year-long series.