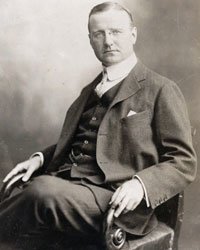 Born to Irish immigrants on Chicago's West Side in 1867, Finley Peter Dunne began a career as a newspaperman in the city in 1884. After working on six different dailies, he settled in as the precocious editorial chair at the Chicago Evening Post in 1892. There, he imagined himself into the character of Martin Dooley, whose 750-word monologues (delivered to genial politician John McKenna or long-suffering millworker Malachi Hennessy) became a Chicago tradition. The fictional Mr. Dooley expounded upon political and social issues of the day from his South Side Chicago Irish pub and he spoke with the thick verbiage and accent of an Irish immigrant from County Roscommon.

Dunne's sly humor and political acumen won the support of President Theodore Roosevelt, a frequent target of Mr. Dooley's barbs. Indeed Dunne's sketches became so popular and such a litmus test of public opinion that they were read each week at White House cabinet meetings. who had become a popular Post feature during the World's Fair of 1893. Unlike the cosmopolitan McNeery, Mr. Dooley was placed on Chicago's South Side, in the Irish working-class neighborhood known as Bridgeport.

Between 1893 and 1900, when Dunne moved on to New York and a different sort of career as a satirist of our national life, some 300 Dooley pieces appeared in Chicago newspapers. Taken together, they form a coherent body of work, in which a vivid, detailed world comes into existence—that of Bridgeport, a self-contained immigrant culture with its own set of customs and ceremonies, and a social structure rooted in family, geography, and occupation.

The Chicago Dooley pieces contain valuable chunks of social history and pioneering contributions to the development of literary realism in America.