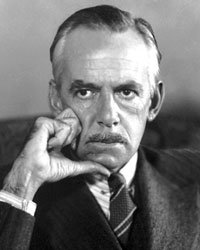 Eugene O Neill, an American playwright, and Nobel laureate in Literature was born in a Broadway hotel room in Times Square, specifically the Barrett Hotel on 16 October 1888 was . The site is now a Starbucks (1500 Broadway, Northeast corner of 43rd & Broadway); a commemorative plaque is posted on the outside wall with the inscription: Eugene O'Neill, October 16, 1888 ~ November 27, 1953 America's greatest playwright was born on this site then called Barrett Hotel, Presented by Circle in the Square.

The son of Irish actor James O'Neill and Mary Ellen Quinlan, the first seven years of Eugene's life were spent travelling the country with his father who had given up his career as a Shakespearean actor to tour in a less satisfying but highly profitable play called Monte Cristo.

O'Neill spent six years in a Catholic boarding school and three years in the Betts Academy at Stamford, Connecticut. He attended Princeton for a short time, but when he was suspended at the end of his freshman year, he decided not to return. In 1909, he set out on a gold-prospecting voyage to Honduras--only to be sent home six months later with a tropical fever. During the period that followed, he spent time working as a stage manager, an actor, a tramp, and a reporter. He also tended mules on a cattle steamer and set out on several other voyages as a sailor. It was here that he came in contact with the sailors, dock workers and outcasts that would populate his plays, the kind of characters the American theatre had heretofore passed over in silence. But this irregular life took its toll on the young man, and in December 1912, he was forced to retire for six months to a sanatorium for tubercular patients. It was during this time that O'Neill began to read
and consequently turn his hand to playwriting, quickly churning out eleven one-act plays and two full-lengths..


With the Broadway production of Beyond the Horizon in 1920, O'Neill began a steady rise to fame. He received countless productions both in the United States and abroad, and when the Provincetown players finally collapsed, he became the Theatre Guild's leading playwright. But by the time he received the Nobel Prize in 1936--a feat which no other American playwright had been able to accomplish--his career had begun to fizzle.

The new generation of critics--Francis Fergusson, Lionel Trilling, Eric Bentley--began to subject O'Neill to a closer scrutiny than their predecessors who had been satisfied simply to find an American playwright of international stature.

In 1956, three years after the playwright's death, a successful revival of The Iceman Cometh and the first Broadway production of A Long Day's Journey into Night, returned Eugene O'Neill once again to his rightful place at the forefront of American Drama.