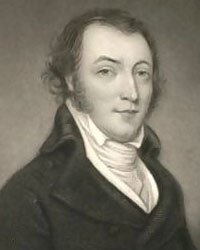 Born at Ballynahowna, near Aughrim, Co. Galway, Ireland, 21 March 1763 Dr. William is known as the father of modern chemistry. His ancestors were driven by Cromwell from the North of Ireland where they had large land holdings at the age of 12, he was sent abroad by his uncle because education for Catholics was impossible in Ireland. His uncle, who was a baron and an Irish exile physician, was made an Austrian noble by Empress Maria Theresa. MacNeven made his collegiate studies at Prague, his medical studies at Vienna. In 1784, he returned to Dublin to practice, became involved in revolutionary events and was arrested and jailed. He spent three years in jail and was released in 1803. He went to Paris and sought an interview with Napoleon Bonaparte to get French troops for Ireland, but Bonaparte refused to help. He entered the French Army as a surgeon-captain in the Irish Brigade. He went to New York in 1805.

In 1807, Dr. MacNeven delivered a course of lectures on clinical medicine in the recently established College of Physicians and Surgeons. He became the professor of chemistry. Later he taught at Rutgers. He was co-editor for many years of the 'New York Medical and Philosophical Journal.' MacNeven was an active Roman Catholic. He was active in many Irish societies. In 1827, he opened a free registry office for the benefit of Irish domestic servants. This service also included directions for naturalization.

MacNeven's best known contribution to science is his 'Exposition of the Atomic Theory' New York, 1820, which was reprinted in the French 'Annales de Chimie.' In 1821, he published with emendations an edition of Brande's 'Chemistry' (New York, 1829). His literary works — 'Rambles through Switzerland' (Dublin, 1803); 'Pieces of Irish History' (New York, 1807) and his numerous political tracts — made him known. This service also included directions for naturalization.